Kapurthala has no dearth of popular tourist places that make it an attractive destination for prospective visitors. One of the better known and mesmerizing tourist attractions of Kapurthala is the Moorish Mosque. The Mosque is famous not only as a tourist attraction, but also as a popular place of worship. 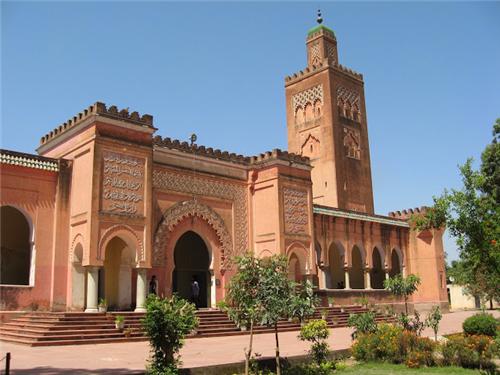 About Moorish Mosque in Kapurthala

The Moorish Mosque is a National Monument and the Archaeological Survey of India is the custodian and managing authority of the mosque. It is a major tourist attraction and draws people from all over the world. The mosque was constructed as an effort by Maharaja Jagatjit Singh. It took a lot of time to build the mosque. The splendid monument took a total of 13 years to be fully constructed.

The construction commenced in the year 1913, and it continued till 1930 when the project was completed. The Moorish Mosque has been modeled on the well known Grand Mosque of Marakesh in Morocco. Maharaja Jagatjit Singh was a great patron of artwork and had rich taste in architectural style. His frequent visits to foreign shores helped in acquainting him with various foreign styles of architecture. And thus he was inspired to build the Moorish Mosque in Kapurthala. 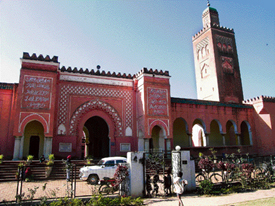 The Moorish Mosque was built under the guidance of the well known French architect M Manteaux. The architect carved out a visual delight which is so evident when one has a look at the inner dome. The dome has beautiful art work that adorns its walls. The artwork was done by artists from Mayo School of Art, Lahore. The beautiful garden complemented by colorful lights surrounds the dome area and enhances the beauty of the mosque. 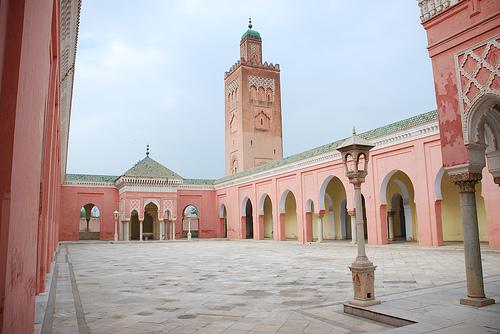 The Moorish Mosque was built at a whooping cost of 4 Lakh Rupees and has simplicity married with style and elegance. The architectural style is different from the usual Islamic style. The generally found marble dome is absent in Moorish Mosque, and instead of that there is a brick work façade where the dome is completely absent. There is a single minaret and the roof of the entrance is absolutely flat. Stone has been scarcely used in the mosque and colors and lines have been used very wisely in the mosque.

Accessibility to Moorish Mosque in Kapurthala

The Moorish Mosque is very easily accessible. It is just 3 kms away from the main city and can be easily reached by local transport once one has reached Kapurthala.

Moorish Mosque should be ideally visited in the month of October or November. It is a time when the weather in Kapurthala is at its best and most pleasant. One can enjoy the beauty of Moorish Mosque in the cool and pleasant weather of Kapurthala in October-November.

The Moorish Mosque provides an opportunity to the visiting tourist to witness fine and exquisite architecture style. The Mosque looks amazingly beautiful in the night with the lighting and the beautiful structure os a warm refresher for anyone visiting Kapurthala.

Explore more about Tourism in Kapurthala